The Return of the Thin White Duck

Everybody seems to be doing a tribute to David Bowie, these days. People all over the world are jumping on the bandwagon claiming “they were Bowie’s biggest fan” and “I was into him when he was at his coolest” or “David Bowie passed the torch to me, Kanye West”. I'll admit, I came to the David Bowie party a little late as I discovered him on Saturday Night Live in 1979. He was impossibly skinny and came out dressed in a lady’s business suit and high heels! He was so completely weird in that appearance (and I was already into “Rocky Horror Picture Show”) so I embraced the entire spectacle right away. Bowi's current LP was the album, “Lodger”. The album was super New Wave and I loved it! I played it on my phonograph and tape-recorded my favorite songs; “DJ”, “Look Back In Anger” and “Boys Keep Swinging” so I could listen to them in my mom’s car. Then, I worked my way backwards through the Bowie catalog. A friend’s mother lent me “Diamond Dogs”, “ChangesOne” and “Low” and I discovered so many songs that became favorites. Then I bought “Aladdin Sane” at the used record shop and was entranced with that album. Once, I got a job painting a mural for a seafood restaurant.  The client wanted to see a maquette of what the mural was going to look like so I promised to have the small painting ready the following Saturday. I procrastinated until the last minute so, Friday night, I put on “Aladdin Sane” and played it over and over for about ten hours until I finished the maquette. To me that’s when I really fell in love with the music of David Bowie. That album is sheer perfection. 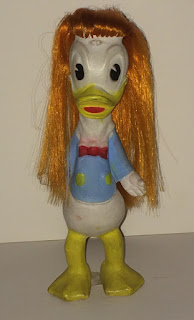 I wasn’t going to share this story until last Saturday when I found this weird toy: a little rubber Donald Duck with this crazy long orange rooted hair! His hair was styled into a 70’s mullet that looks very glam on the fashionable mallard. 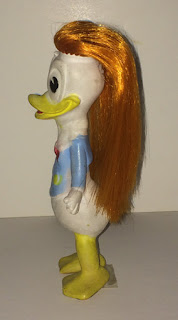 We named him “Ziggy Starduck” and deduced that he was a sign from Major Tom himself to ‘let all the children boogie’.

Posted by American Toycoon at 10:57 PM