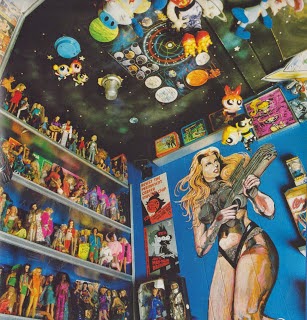 A friend took me to a party at the soon to be my good friend, Kari’s house for a “Barbie Birthday Party” many years ago.  Kari’s house was incredible! She had tons of various toys and dolls on display, glittery pink floors and the entire house were all decorated in Barbie art. Tacky pink Barbie banners stretched across the ceiling, pink lights and gold spray painted dolls hung on the branches of the ficus tree that grew from outside through the crack in the living room window! 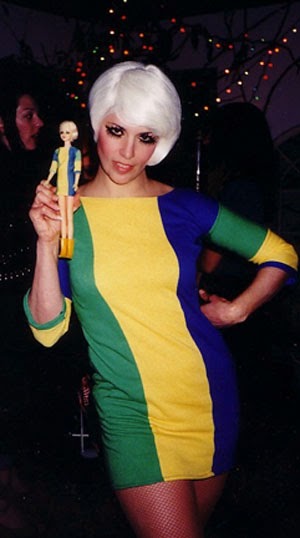 So many colorful people in wild costumes and hats from every decade of the Barbie doll! Spiked pink punch with fruit slices, bowls of pink gumdrops and plates of pink cookies with sprinkles. Kari was dressed as the Twiggy doll in a human-sized version of the Mattel Twiggy doll’s original outfit. She had various performance artists doing erotic performances featuring Barbie as their perverse theme. Plus, the best part was that Kari had set up assorted Barbie craft projects to do in every room. In one room there was piles of doll clothes, shoes, heads, bodies, arms, scraps of fabric, X-acto knives, hot glue, colored foil, glitter, paint, scissors and markers on a circular table so guest could create their own expression featuring the iconic doll. I sat down beside a guy named Bichon who looked like a kooky beatnik. We started to chat, hit it off and became collaborators on a Barbie project. I stripped off the paint from a doll’s face with acetone. I taped off her head, exposing her hair then spray-painted her hair black. Bichon started to make a wedding dress from a few paper doilies.  When the paint on the hair dried, I pulled the tape off and repainted the make-up on her face. I found a tiny bridal bouquet, added a black veil, a ribbon and colored the flowers to look weathered.  Bichon had finished the elaborate wedding dress and it was spectacular! The dress had a long train in the back, scraps of old lace with plastic spiders on the peplum, bows and puffed sleeves with tiny Tic Tac breath mints glued to them. Kari gave prizes for the favorite art creation so after the voting by the crowd; Bichon and I won the contest! 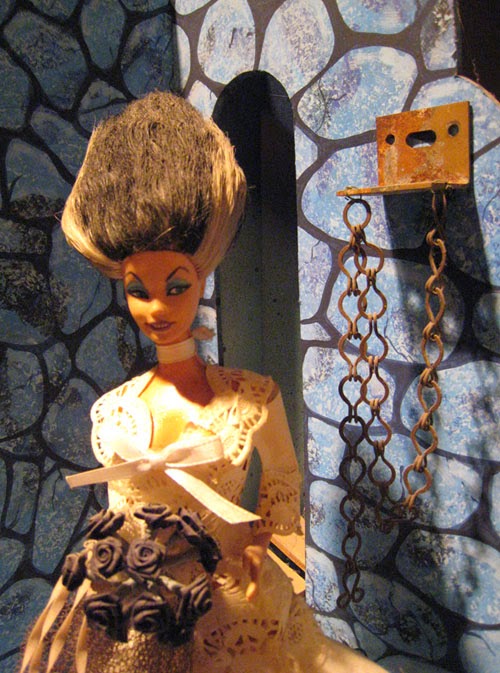 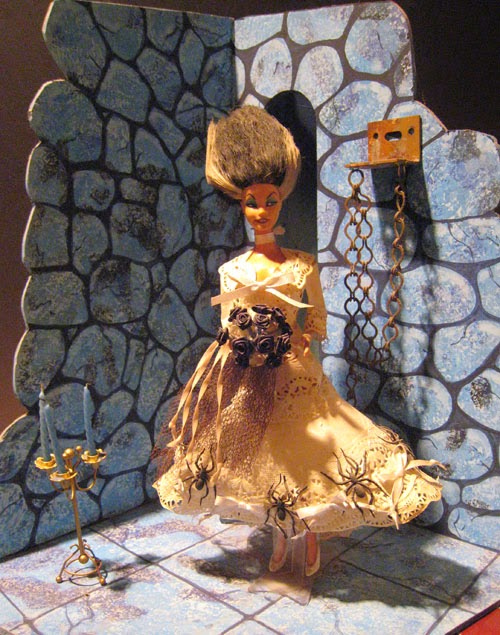 The Bride of Frankenstein Barbie was our lovely creation that night.

Bichon and I became great friends after that. Hope you making some fantastic Barbie art in heaven, Bichon.
Posted by American Toycoon at 7:19 PM